Start a Wiki
Tanya is a character from the PBS series Nature Cat, who makes cameos in the show. She made main appearances in some episodes such as Nature Cat and Mr. Hide and Rights or Wrong. She also appears in the original Nature Cat 1979 series Fred and the Nature Gang, where she was Nature Cat's first love interest.

Both versions of her will be featured in the R.I.P Google Plus video.

On July 14, 2018, when Brian was doing an app review of Math League, a photo of Tanya disguised as Carolline Thetford was seen on the lock screen of Brian's iPod Touch 2G. Brian described who Tanya was. Brian originally referred Tanya as Ruby.

She appeared on Brian Coukis the 90s Kid's channel again, when Brian was doing an app review of Double Tap, he showed that he made an iPhone wallpaper of Tanya the Cat. Brian decided he'd called her Tanya until he'd found her real name and he performed what her voice would sound like.

When Brian did an app review of Dot Lock Memory, Tanya (known as Ruby) disguised as Caroline Thetford said Hi to everyone who was watching the video.

On February 8, 2019, Brian legitimately got Tanya as a plush dolls from Budsies. He reviewed the plush doll on his YouTube channel Brian Coukis the 90s Kid and he even talked about the history of Tanya, as well more information on Fred and the Nature Gang.

The History of Tanya Edit

According to Brian, Tanya was originally a character from the 1979 Nature Cat series known as Fred and the Nature Gang. She debuted in the first episode. She was an auxillary explorer and is Nature Cat's first love interest before Catalina, Nature Dog, and Gwendolyn. She is also a klutz and sometimes bossy. Tanya is voiced by Catherine Disher in the original series.

Tanya is an orange cat who has brown stripes, a pink nose, a beige tummy and wears a blue collar. She also has an orange tail with brown stripes and the tip of her tail is beige.

In her original appearance, she is made to look identical to Nature Cat (known as Fred). She is a pink dog with purple ears, a dark pink nose and freckles. She wears a green hat with red feather affixed to it, looking very similar to the one Fred wears, a green shirt with a yellow line going down, a yellow belt on her waist, green pants, and dark purple shoes. She also has a pink tail with a dark purple tip at the end.

In the R.I.P Google Plus video, she looks the same as her 2015 appearance in Nature Cat, but instead of her wearing a blue collar, she now wears a white shirt with a red T on it.

Tanya's original appearance in "Fred and the Nature Gang" and its TV specials.

Tanya as a Plush Doll (as Budsie) 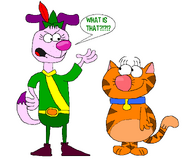 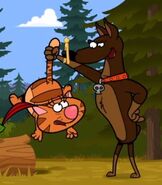 Add a photo to this gallery
Retrieved from "https://briancoukis.fandom.com/wiki/Tanya?oldid=3133"
Community content is available under CC-BY-SA unless otherwise noted.