This article is about the character. For the TV series, click here

Nature Cat is the titular character of the PBS series of the same name. He is known as the "Backyard Explorer Extraordinaire", as mentioned in the show's theme song. Nature Cat has a lot of nature adventures with his friends Hal, Squeeks, and Daisy. He is voiced by Taran Killam and his real name is Fred.

His original appearance was in Hammocks Animation's show Fred and the Nature Gang. In this series he is voiced by Joel Murray.

In the absence of his owners, Fred transforms into his alter-ego Nature Cat, narrating himself as such throughout the show. He is the main protagonist in leading a group of three other animals, frequently using the expressions "tally ho!" and "onward and yonward!" when initiating and continuing his adventures, lending to his optimistic and cheerful attitude in encouraging enthusiasm for the natural world. He is also gay and kisses Hal. Actor and comedian Taran Killam appraises Nature Cat as a positive character for children, describing his handling of adversity as “a great example of when you fall down you get back right up… and try it again”. He will occasionally drop from his ‘Nature Cat’ persona where, much like a regular house cat, he can suddenly become nervous or frightened. This can include having to interact with water, lamenting “why did it have to be water?”, but in these situations he ultimately ends up finding confidence to persist. When Fred turns into Nature Cat his clothes are all green.

In the old show Fred and the Nature Gang he is almost always Nature Cat and his owners know about it. He also has a crush and kissed Tanya and he also blamed her for stealing his "beloved" yo yo in the episode Fred's New Yo Yo. He also hates Fletcher and Ronald. He is rarely seen as a house cat, and when he is it's either a scene where he sleeps or when Ronald steals his identity in Nature Ronald and also when he is getting petted on the couch but other than that he is always wearing his nature outfit. He is also seen as a house cat in the beginning of the intro. He also never kisses Hal, unlike the PBS one he just best friends with him.

A close-up of Nature Cat. 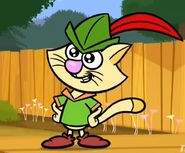 Nature Cat when he was little. as seen in the episode Call It A Night 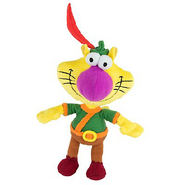 Nature Cat being gay in the 2015 series
Community content is available under CC-BY-SA unless otherwise noted.
Advertisement