Joy is a character who appears in the Nature Cat 1979-1994 series known as Fred and the Nature Gang.

She is a smart, bright, and elegant poodle who tries to solve everything. She is known to be a good chef as seen in the episode "The Sleepy One", when Nature Cat and his friends help Joy make Nature Donuts for Martin to make him feel more active.

Joy is a pink poodle with pink spots, a pink nose, and freckles. 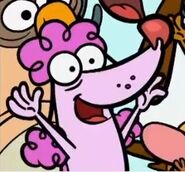 Joy's 1979 appearance in Nature Cat, as seen cheering in the audience for Dog Gone.

Add a photo to this gallery
Retrieved from "https://briancoukis.fandom.com/wiki/Joy?oldid=2950"
Community content is available under CC-BY-SA unless otherwise noted.