Start a Wiki
For more information of Hammocks Animation, I suggest you visit wiki

Hammocks Animation was the original production company for Nature Cat (formerly known as Fred and the Nature Gang.)

It was founded in 1957, when the company first made a comic series called Five K. Gagnon, which ran from the late 50's to the early 60's. A TV series based on the comics aired on CC Network from 1962 to 1981. They also co-produced Frosty the Snowman. In 1976, they co-produced Frosty's Winter Wonderland. In the late 70s, the company began producing children's animated television series. Those are Wally Down Under (1977-1978), which was the first show by the company, Fred and the Nature Gang (1979-1983; 1988-1994), which was the company's most famous work, Adventures of Benjamin the Magical Train (1981-1982), Lenny the Genius (1983-1993), and the animated soap operas Beautiful Times (1968-1995), Southland (1978-1995) and The Animals (1983-1995), which was co-produced with Procter & Gamble Animation, along with Beautiful Times and Southland. There was a short series for Fred and the Nature Gang in 1978, before the actual series started a year later. The company continued to produce the 6 TV specials for Fred and the Nature Gang (later known as Nature Cat in 1994), in association with H.O.T Entertainment. In 1992, they co-produced Frosty Returns. In 1996, the company became defunct (2 years after the Fred and the Nature Gang series finale.) company's founder, Thomas Hammocks, died from a stroke at the age of 87 on May 26, 2010. Ten years later in 2006, a new animation studio under the name of Hammocks Digital Studios was formed by Amber, Byron, and Melanie Hammocks. 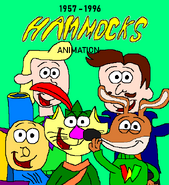 The promotional logo for Hammocks Animation.
Add a photo to this gallery
Retrieved from "https://briancoukis.fandom.com/wiki/Hammocks_Animation?oldid=3306"
Community content is available under CC-BY-SA unless otherwise noted.