Darryl, Victoria, and Lance were 3 one-time characters that appeared in the Nature Cat episode "Garden Impossible" where they honored Daisy and Petunia as members of the Urban Gardening Club. They are never seen alone.

They will appear in the R.I.P Google Plus video.

The Group on Brian Coukis Edit

Brian talked about them in his 2019 Happy St. Patricks Day blog. He thought they look so amazing and he wanted to predict what their names were.

Darryl is a white bunny who has a light-red nose, teal glasses, freckles, and a light pink tummy. He also wears a light blue shirt with the Urban Gardening Club logo on it. In the R.I.P Google Plus video, Darryl wears a green shirt with a letter "D" on it.

Victoria is a white poodle with light gray hair and a pink bow. She also has a pink nose, a light pink tummy, and a wears a pink collar with silver dots. She also wears the same Urban Gardening Club shirt as Darryl. In the R.I.P Google Plus video, Victoria wears a violet shirt with a letter "V" on it.

Lance is an orange cat who has slightly darker stripes, a dark red nose and a beige tummy. He has an orange tail with brown stripes as well. He wears the same Urban Gardening Club shirt as Darryl and Victoria. Not to mention, he looks like Tanya's brother. In the R.I.P Google Plus video, Lance wears a cerulean blue shirt with a letter "L" on it.

Darryl, Victoria, and Lance in their R.I.P Google Plus outfits. 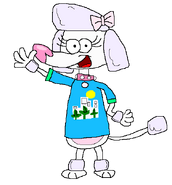 Darryl, as seen in the Nature Cat episode Garden Impossible. 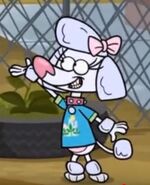 Victoria, as seen in the Nature Cat episode Garden Impossible. 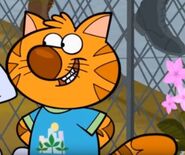 Lance, as seen in the Nature Cat episode Garden Impossible. 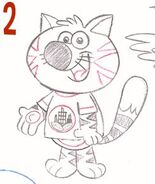 Lance in the N.C. Season 2 concept art by Dave MacDougall.
Add a photo to this gallery
Retrieved from "https://briancoukis.fandom.com/wiki/Darryl,_Victoria,_and_Lance?oldid=1140"
Community content is available under CC-BY-SA unless otherwise noted.